Conference Series Ltd invites all the participants across the globe to attend 7th World Congress on Biopolymers and Polymer Chemistry Osaka, Japan .

Dr. E. H. Yang is a full professor of Mechanical Engineering Department at Stevens Institute of Technology. He received Ph.D. degrees from Ajou University, Korea. After his postdoctoral training at University of Tokyo and at California Institute of Technology, he joined NASA's Jet Propulsion Laboratory where he became a Senior Member of the Engineering Staff. At JPL, he received a number of awards, including NASA ICB Space Act Awards, Bonus (Level B and C) Awards and a number of Class 1 NASA Tech Brief Awards. In recognition of his excellence in advancing the use of MEMS-based actuators for NASA's space applications, he received the prestigious Lew Allen Award for Excellence at JPL in 2003. He is an Associate Editor and/or Editorial Board of several journals including Nature’s Scientific Reports.

The control of adhesion of liquid droplets on solid substrates has broad implications in surface cleaning, water treatment, microfluidics, biochemistry, and lab-on-a-chip devices. An earlier report using a conjugated polymer, polyaniline (PANI) doped with dodecylbenzene sulfonic acid (DBSA), demonstrates the control of the contact angle of a liquid droplet. Poly(3,4-ethylenedioxythiophene(PEDOT) polymers bearing imidazolium ionic-liquid moieties (PEDOT-Im) show multi-responsive properties to a variety of stimuli, such as temperature, pH, oxidative doping, and the presence of anions. Recently, there has been a growing number of reports concerning the liquid adhesion and wetting on polypyrrole surfaces. Here we show the development and application of smart polymer functional surfaces using dodecylbenzenesulfonate-doped polypyrrole (PPy(DBS)); we demonstrate a novel in situ control of droplet pinning on the polymer surface, enabling the control of droplet adhesion from strongly pinned to extremely slippery (and vice versa). The pinning of organic droplets on the surfaces is dramatically controlled in situ, presenting a great potential for manipulation and control of liquid droplets for various applications including oil separation, water treatment and anti-bacterial surfaces. We believe that our work represents a major advance in materials science and engineering, especially pertaining to those topics that involve functional and tunable surfaces

Tien-Yau Luh obtained his Ph.D. degree from the University of Chicago (with L. M. Stock) in 1974.  After spending two years of postdoctoral research at the University of Minnesota (with P. G. Gassman), he began his independent research at the Chinese University of Hong Kong in 1976.  He moved back in 1988 to his alma mater, National Taiwan University where he has been University Chair Professor. He officially retired from his present post in August of 2016 and was appointed as Distinguished Chair Professor and Professor Emeritus.  He has published 290 papers and has received numerous awards.  He is also serving as a member of the advisory/editorial board for Chemical Communications, Chemistry-A European Journal, The Chemical Record, Bulletin of the Chemical Society of Japan, Tetrahedron, Tetrahedron Letters and Springer Lecture Notes in Chemistry. His current research interests include organometallic chemistry in polymer synthesis mimicking biomacromolecules, and chemistry of materials.

A ladderphane is a ladder-like polymer constituted of multiple layers of rigid linkers covalently linked to two or more polymeric backbones.  The linkers can be planar aromatic, antiaromatic, macrocyclic metal complexes, or three-dimensional organic or organometallic moieties.  Structurally, a DNA molecule is a special kind of ladderphane, where the cofacially aligned base-pair pendants are connected complementarily through hydrogen bonding.

Two norbornene or cyclobutene moieties fused with N-arylpyrrolidine are employed to connect covalently with rigid linkers.  Ring opening metathesis polymerizations (ROMP) of these monomers using the ruthenium or molybdenum catalyst give the corresponding symmetrical double-stranded ladderphanes.  Depending on the catalyst, double bonds in these ladderphanes can be either E or Z selectively. The presence of N-arylpyrrolidene moiety is crucial to control the isotactic stereoselectivity.  The linkers in these ladderphanes are aligned coherently along the longitudinal axis of the polymer.  Strong interactions between them may take place as evidenced by fluorescence quenching, excimer formation, Soret band splitting or electron hopping. Chiral helical ladderphanes are synthesized by incorporating chiral linkers.

These ladderphanes can easily aggregate to form a two-dimensional highly ordered array on graphite surface up to submicron area as revealed by scanning transmission microscopy (STM).  Such assembly furnishes an entry to orient planar arene moieties cofacially, while each linear array of such arenes is insulated from the adjacent arrays by the polymeric backbones.

When cyclopropene having spirally connected N-ary azetidine is used for ROMP, substituted alt-methylene-vinylene with all double bonds in trans configuration is obtained. The stereospecificity can be considered as mimicking proofreading and repair in DNA synthesis. Two-dimensional polymers obtained from ROMP of biscyclopropene will be 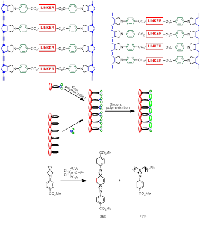